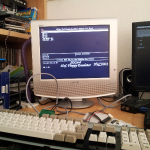 When I received my HxC slim floppy drive emulator, I was very excited. My original floppy drive was 15 years old, and was not working properly, making a lot of noise, and killed 2 of my floppies.

When I plug it into my amiga and switch it on, nothing seems to work : the red light is on, and it makes a “grrrt-grrrt” telling that it is searching for a drive, but the amiga boots again and again on the internal hard drive.

When I push the button, it make a “beep”, but nothing works. The same with a long push on the button normally used to activate the HxC boot menu.

In the early startup menu, if I disable all the boot options but the “DF0:”, it begins to boot and give an error “Not a DOS disk in DF0:”.

Under the Workbench, an “NDOS” disk appears. When trying to go in the DF0: in DOpus, or in a shell window, it says “No disk present in DF0:”.

At the begining I suspected the SD card to be a bad one, or the SD adaptor, so I tested the HxC with other Amigas (thanx to Laurent from Amedia Computer, France), and with other SD cards. Everything worked ok, so I also suspected my floppy cable, and also the onboard floppy manager chip to be dead. But the original floppy drive that came with the A1200 boots ok (it kills floppies after a while, but it boots).

The Amiga is an ESCOM one. We all know that ESCOM used to sell their amigas with a floppy mod wich was intented to save money and make the productions faster, allowing to use a PC floppy disk instead of an original AMIGA one.

Those PC floppies don’t manage the RDY signal, so the HxC floppy emulator boot menu, even if it does not officially uses it, can’t boot.

To make the HxC slim floppy emulator works with an ESCOM Amiga 1200, we just have to disable the ESCOM mod cutting one wire they added on the back side of the motherboard, on the floppy connector.

The usual Warning : PLEASE BE CAREFULL, IF YOU ARE UNSURE OF WHAT YOU ARE DOING, SIMPLY DON’T DO IT ! THERE ARE MANY PEOPLE WHO WILL BE PLEASED TO DO IT FOR YOU. JUST GET IN TOUCH WITH THE AMIGA USERS GROUP OF YOUR AREA, OR ON FACEBOOK. Amiga hardware are now very rare, so, take care of it !

So, you open your amiga, and disconnect everything. 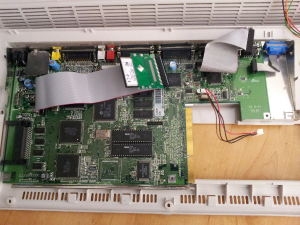 Please verify it’s an ESCOM amiga, it should be REV 1D4 : 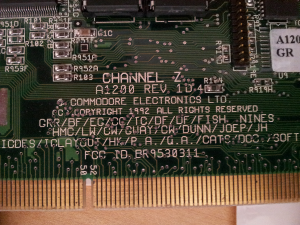 Here is the back face of the motherboard : 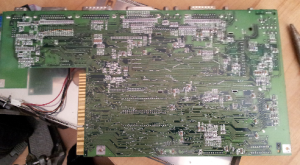 Now, under the floppy connector, we can see a little wire : 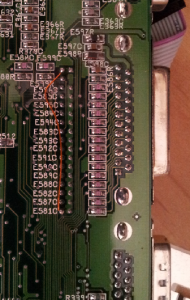 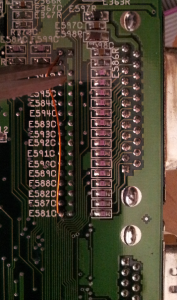 Now, plug everything usefull to test the HxC : 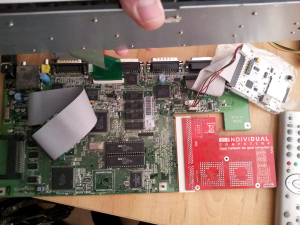 Switch the beast on, tadaaaa : 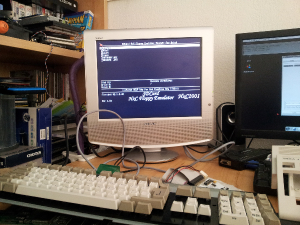 Certainly test the mod with more than just a few hfe files. I’ll post the results.

The first result is that Arte/Sanity don’t boot, but i’m not 100% sure of the file.

Maybe I also have to make an article on how you can use the HxC slim work in a multiple disk game/demo, and how we can simply change the disk in the emulator under the workbench (if possible).

So, After trying a lot of different demos, it appeared that this mod only works for DOS formated disks. The disks which have a special boot, like most of the demos won’t boot at all, because they will wait for the RDY signal for ever.

You have to make one other mod to make it work. I will post the photo soon.

Until this, have a look to this video :

– the fix in video